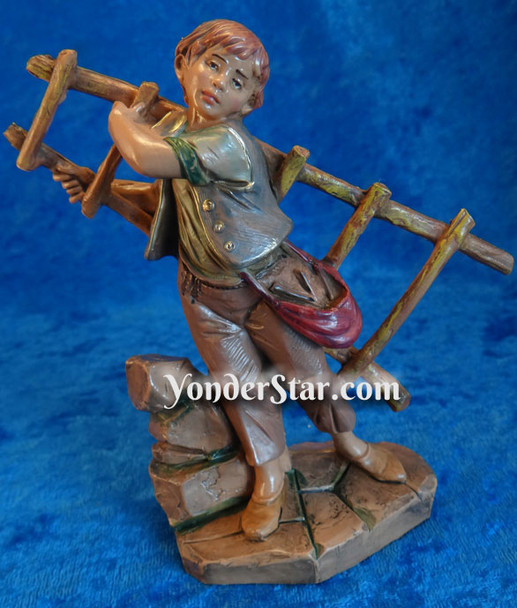 Carlo, Boy with Ladder is a 5 inch scale Fontanini Villager for your Nativity Scene.  Re-Introduction in 2018.  59806

Fontanini Nativity figures are made in Italy and are richly detailed and hand-painted in an old-world palette for authenticity and enduring beauty. The figures are handcrafted from a specially formatted polymer that is resistant to chipping and breaking.

The Fontanini Nativity story of Carlo: Carlo was a well-known and respected builder and repairman in the town of Bethlehem. At the time of the Census, the town was very busy and Carlo had much work. He was called to the inn to repair a hole in the roof of the stable. He repaired the roof and went on to his next job. Not just once, but twice more in the same day, he was called to return to the inn and fix the stable's roof - the hole had somehow reopened! Carlo repaired the hold yet again, making great effort, and using the strongest of materials. Still, later in the evening the innkeeper arrived to tell Carlo the hole had reopened once more. The next day, Carlo carried his ladder to the stable to make the repair, and saw a large crown of shepherds with their sheep . One of the shepherds smiled when he saw Carlo, and told him not to worry - that the hole in the stable's roof had allowed the most brilliant Star to grace the manger where the Baby Jesus lay during the night, and now let the gentle warmth of the morning sun caress the Child's sweet face. There was a reason that the hole could not be repaired!