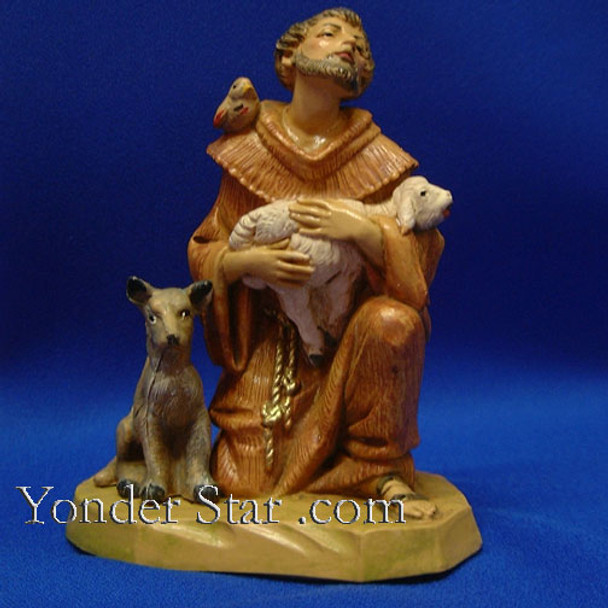 The tradition of the Nativity scene began when, in the year 1223, St Francis staged a pageant with people acting out the parts of the Holy Family, the Wisemen, Shepherds, and Villagers. Also included were oxen, cows, sheep, and other animals. 65260

Fontanini Nativity figures are made in Italy and are richly detailed and hand-painted in an old-world palette for authenticity and enduring beauty. The figures are handcrafted from a specially formatted polymer that is resistant to chipping and breaking.

The Fontanini Nativity story of St. Francis of Assisi: Formerly a child from a wealthy family, Francis gave away all of his possessions and committed his life to God. News of his deeds and kindnesses spread, and soon he had many followers, who soon became the Franciscan order of priests. St. Francis is known not only for his humility and kindness to all animals, but also as the person who planned an executed the very first Nativity pageant.

MSRP:
Now: $22.50
Was:
Seth with kittens for 5 inch scale Fontanini Nativity scene. Part of the House of Fontanini collection, this figure is reserved exclusively for those attending the Fontanini annual tour.  $21.00...

MSRP:
Now: $19.00
Was:
Reindl Nativity handcarved Rooster at from the LEPI Studios in Italy. This 8 cm (3.25 inch) creche set is handcarved from Alpine Maple, which is indigenous to the Groden Valley and is used for all...

MSRP:
Now: $239.00
Was:
No Nativity is truly complete without the preferred mode of transportation of the wisemen. The seated camel was a welcome addition to Harald Kastlunger's whimsical nativity and shows off the true...