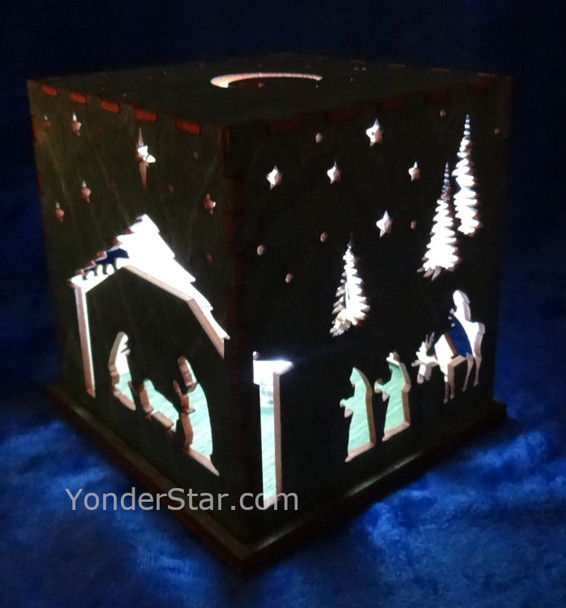 We are thrilled to offer this amazing hand-made in Maine, USA Nativity scene. This item is neatly dovetailed together and features 5 sides of display.

We wanted to have a Nativity scene from Maine that not only expressed the joy of the season, but also featured some of the things that are unique to Maine. If you look closely, you will see these distinctive features:

MSRP:
Now: $84.50
Was:
Stunning nativity scene handmade in Mongolia from clay, silk, handmade paper and other embellishments. Each nativity set is unique with variations in color and design. Nativity scene made by hand by...

Tagua Nativity and Tree Hand Made in Ecuador

MSRP:
Now: $14.99
Was:
A vibrant green tree stands behind the nativity scene and makes a beautiful contrast. Hand-carved from tagua nut in Ecuador and fair trade. Tagua nuts are harvested and skillfully...

MSRP:
Now: $10.00
Was:
Wooden nativity scene made in Maine and small enough to place on a desktop or windowsill. The wooden stable measures 1 3/4 inches tall. Made in Maine, USA from sustainably harvested wood.

MSRP:
Now: $84.00
Was:
Nebraska artist Sondra Gerber creates this luminous nativity scene from aluminum. There are so many things to love about this vibrant nativity scene. The way the light reflects from the surface, you...

MSRP:
Now: $24.50 - $76.00
Was:
A cleverly designed cherry wood nativity set assembles like a puzzle, with each piece able to fit in its own spot. Made in Pennsylvania from sustainably harvested, solid cherry wood. The wood is...

MSRP:
Now: $24.99
Was:
Laser cut by hand and made in the USA. This amazing 3-dimensional Nativity scene features individual panels pieced together to give a wonderful depth of field effect. Open from front to back, the...